Groovin’ to that French-Gypsy Swing 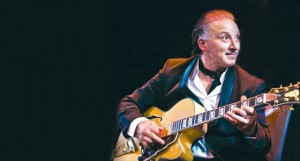 When Jazz at the Lobero brings French guitarist and violinist Dorado Schmitt to the stage next week the occasion will mean irresistible swing and supremely melodic improvisation by the legendary string man and the rest of his quintet. Of course, swinging and ‘singing’ are marks of any good jazz artist. But Schmitt’s “Gypsy jazz” spells more—a living extension of the European continental jazz of Django Reinhardt dating back to the 1930s. Guitarist Reinhardt’s own genius was ignited by the sounds of American trumpeter Louis Armstrong, which then found expression through the French “Musette” café music and the traditional Roma sensibility of his roots. Quintette du Hot Club de France, headlined by Reinhardt and violinist Stéphane Grappelli, became an international sensation, with Grappelli and Reinhardt gaining the approbation, and sometimes sharing the stage, with American legends like Armstrong. The most prominent exponent of America’s new music in the Europe of his time, Reinhardt blasted preconceptions about the guitar, and made records that powerfully influenced modern guitarists from Jimi Hendrix to George Benson.

Schmitt, like Reinhardt, is of Romani stock. Born four years after the death of the latter, he came of age learning the rock guitar licks of Carlos Santana and Hendrix, until his father made the suggestion, “Listen to Django, and you will understand.” Today, sporting a Clark Gable pencil mustache—like Django—Schmitt looks as if he’s magically materialized from the frames of an old Hollywood romance.

And yet, according to accordion player Ludovic Beier, Schmitt’s approach subtly incorporates his rock ‘n roll past. “All that influence opened his playing to do a lot of things inside the Gypsy jazz, which is very important—to open the music—because Django Reinhardt is one genius and there will never be another one,” Beier told me by phone from a tour stop in Chicago. “So it’s very important for artists today that they add a personality inside their tribute to Django.”

Alongside Schmitt and Beier, Django Festival All-Stars includes violinist Pierre Blanchard, rhythm guitarist Francko Mehrstein, and Xavier Nikq on double bass. Named for the annual Gypsy jazz celebration at Birdland Club in New York City, which marks its fifteenth anniversary this week, the ensemble’s Santa Barbara debut couldn’t be better timed—radiant in the afterglow of the Django Festival while priming for a performance at the San Francisco Jazz Center. Expect uncontrollable toe-tapping. “That’s why I think it’s so popular,” Beier explained. “You have very catchy romantic melodies that can break your heart, but in the concert you also have very fast virtuosity in the sound, so you can switch from one mood to the other very fast, and I think this is something very interesting.”