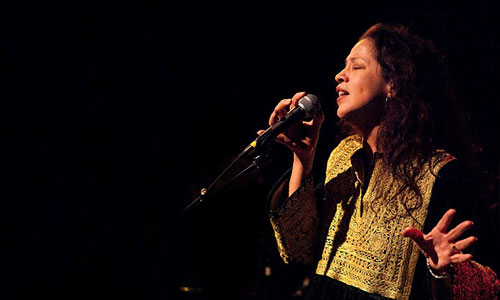 The evening rotated through subsets of the singers and instrumentalists, ranging from light-hearted songs by Batalla’s brother, Ovation Award-winning actor and writer Rick Batalla, to a cerebral work for solo piano written and performed by television and film composer/producer/keyboardist Dave Palmer. Rhythm dharma for the evening was solidly braced by Batalla bedrocks Gilberto Gonzales on bass, young wonder drummer Alejandro Medeles, Claud Mann (Batalla’s husband) on congas, with special guest Grammy-winning composer/producer Jon Gilutin on piano, whose improvisational visions blissfully filled a multitude of song choruses throughout the night. END_OF_DOCUMENT_TOKEN_TO_BE_REPLACED