Call me brass player road kill. I admit it. For nine years of my precious youth I practiced religiously, first attempting to conquer the trumpet, and then as the god of high range did not answer my prayers, I jumped ship and swam to the trombone row boat. I made it as far as college jazz ensemble, but finally, at age 22, I was done. I accepted that I wrestled with the plumbing for the better part of a decade, and the plumbing won.

It was painful going. I had been dedicated, practiced hard—in other words, performed the requisite sacrifice—and expected the gods to do their part. But they only modestly responded. Yet they bestowed their graces liberally on other boys I met along the way, and some of these I know did not practice as hard as me. It wasn’t fair. I didn’t understand why I was being marginalized from something I wanted so badly. Eventually I watched myself veering away from the center lane towards the brass highway shoulder, and I took the next exit. I sold the horn the following year.

I know I’m not the only jilted lover to be blown out the brass players’ spit valve. Who knows how many I pass every day on the freeway? If only I had special spectacles, like modified military infrared goggles, which would make their cars glow an especially warm tint of lacquered brass. On the busy freeways of LA (assuming they actually moved), who knows how many you would pass every minute along the river of opposing traffic?

But I wasn’t a bitter. Not ultimately. In fact, the opposite feeling occurred. I came to better appreciate brass artistry, now that the “me” was entirely out of the picture. There was no ego to get hung up in comparisons. So that brass choirs, the Canadian Brass, Copeland, Mahler, Jazz at Lincoln Center Orchestra, ol’ Satchmo and Alison Balsom all light my fire today.

Which brings me to the fun at Santa Barbara’s SOhO club on Monday, August 18. Two contemporary music ensembles took the stage, both with trumpet and trombone wizardry, and both comprised of very accomplished musicians (all formally, most classically trained). River Song Quintet is a Los Angeles-based five-some consisting of female lead vocals, electric guitar, violin/viola, cornet and trombone. The Westerlies are a New York-based brass quartet consisting of two trumpets, tenor and bass trombone—and that’s it. The two ensembles make for a cozy billing together, as both represent sophisticated genre-defying trends being set today in a new world order of twenty-something jazzsters and classicists who refuse to be pigeon-holed. I was reminded of sitting in the same club last February, when maverick songster Gabriel Kahane and the yMusic Ensemble let loose a similar spell, courtesy of UCSB Arts & Lectures.

More than anyone else, Alina Roitstein’s agile soprano reminds me of Shara Worden (My Brightest Diamond) in terms of range, precision, clarity and atmosphere. She is an adept singer of vocalise (what’s called ‘scat’ when the tempo swings)—in fact, there wasn’t a lyric until the third song, just as I was beginning to wonder if the River Song set would be entirely instrumental. And Roitstein handles chromatically tough lines with tuning that is a marvel to behold. Rhythm section needs are held down entirely by able guitarist Gregory Uhlmann, who provides the bass lines, with forays into looping and other effects. I wondered at times of the fun he might have if a bass player and drummer freed him from yard duty. But part of the quirky charm of River Song is the odd combo of instruments, and its deviation from assumed requirements. Lauren Baba plays the bowed strings, Andrew Rowan is the cornetist, and Harrison Kirk handles the t-bone. Although River Song’s original work (there was only one cover—the Beatles’ Blackbird) is carefully arranged, there is plenty of room for improvisation in this chamber music—jazz—minstrel ensemble, and each of the five members can hold their own. Two especially delightful pieces featured imaginative settings of American poetry. One of those, Monarchs Landing and Flying, the track that names their new CD “Monarchs,” is a movement from a song cycle of settings of David Baker’s poetry by guitarist Uhlmann. The drone reminded me of Indian tambura, and the piece rises with an undulation like wings. You can listen to cuts from the album here. 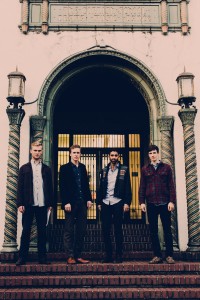 SOhO must have paid a pretty penny this week on hinge repairs, because The Westerlies blew the doors off with their set. It is difficult to express exactly the experience of listening to these guys. Power, precision, adventure, color. Part march band, part jazz, part chamber ensemble. Their orchestrations can be sparse and intimate, or rip through swaths of key color and shifting vamps, sounding so big and complex you’d swear there are more than four guys up there. Toto, I’ve a feeling we’re not in Kansas anymore—or wherever it was that brass ensembles got pigeon-holed. The tight charts were all played from memory. Tuning and technique were impeccable. Riley Mulherkar and Zubin Hensler make an electrifying trumpeting duo, Andy Clausen handles the middle range on tenor trombone, and Willem de Koch holds up the bottom end on bass trombone. These guys are all old buddies from Seattle, and their professional polish seems cemented with deep friendship. The thrill for me is to see ‘old school’ instruments tapped anew: young men who have inherited and embodied some of the best training available, taking up the brass torch and carrying it with such aplomb that the rest of us begin to wonder, hey, maybe we’re all wrong thinking these are the instruments of yesterday, perhaps their legacy is tomorrow. An outrageous thought, granted. But these musicians and arrangers are coming of age in a global context when the old maps are cracking, and green sprouts are coming through the fissures.

The Westerlies stopped in at the KCSB studio earlier in the day, and gave Santa Barbara airways a live taste of their artistry. I happened upon their new disc, “Wish the Children Would Come Home,” even earlier Monday at the studio, and played a few cuts on The Classical Now. The album consists entirely of music by composer and keyboardist Wayne Horvitz, who has served as a mentor to the Westerlies, collectively and individually. Listen to a few selections here, and check out the Westerlies for yourself. You don’t have to be brass player road-kill to be resurrected by this music.